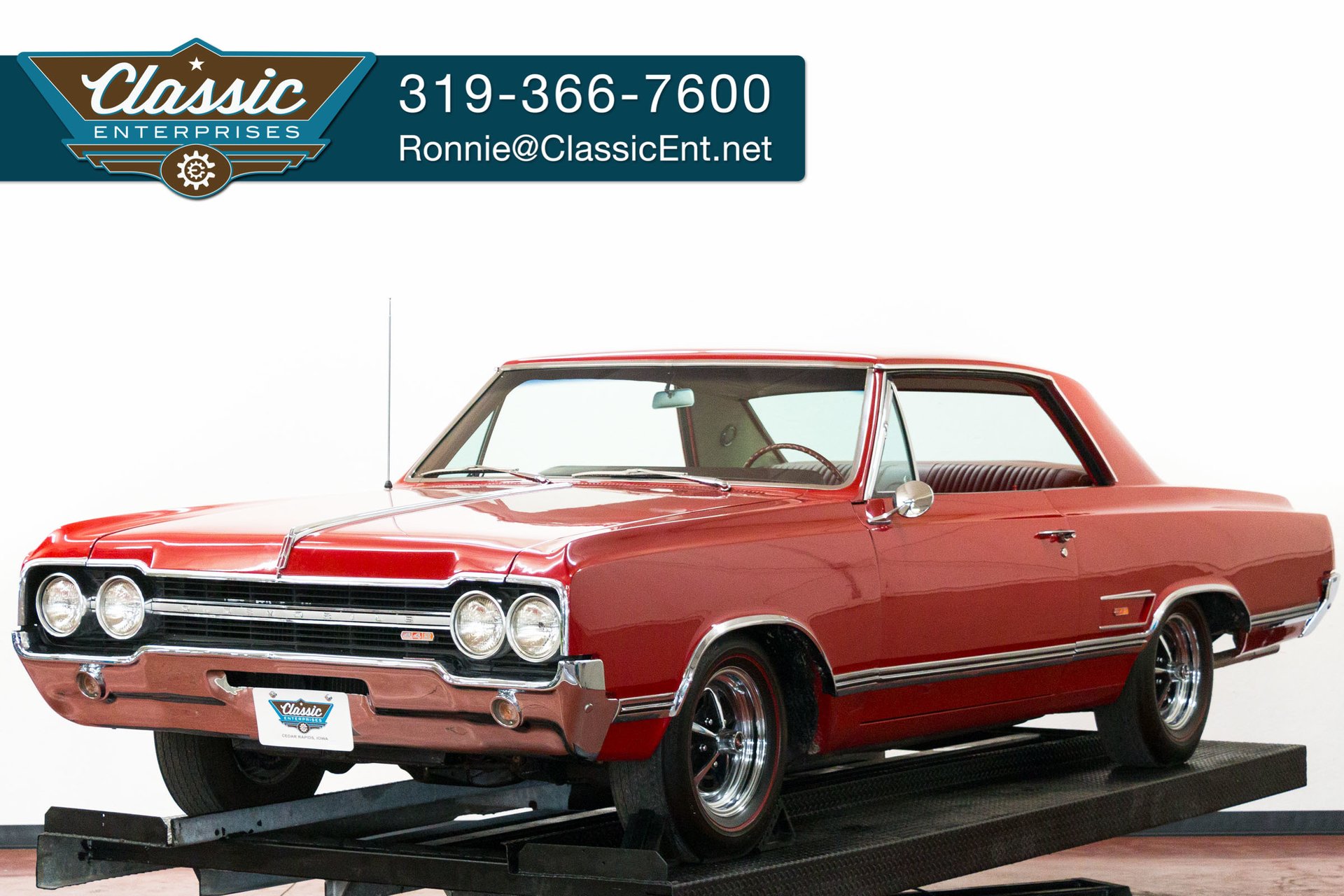 When Olds introduced the 442 it had a look and the power that the burgeoning Muscle Car market was itching for and this combination scratched that itch to perfection. The correct Target Red paint is slick and the body alignment is exceptional. It is an original 442 that has experienced a frame off restoration with all the right stuff including, nice new bucket seats and solid floors and frame. The engine is the correct rebuilt 400 and the transmission is a smooth shifting automatic with floor shifter, a rear gear ratio of 3.08 that is an Olds Anti Spin 12 bolt unit that makes it a pleasure to cruise down the highway. The exhaust is complete and really has a great note when you open up the secondaries. It comes with power steering and brakes, factory tach on the console, tinted glass, full length console, and immaculate Olds Rally Wheels with Firestone F7014 Red Line tires. Don't miss out on a chance to own one of the more desirable Olds 442s from the 60s ready to enjoy now.
Having come from sunny Arizona the underside of this fine 442 is clean and solid all the body panels are the same. Our shop just rebuilt the entire motor with consultation from the experts at Mondellos. We have an extensive parts list from lifters, to gaskets, to rocker arms, camshaft, push rods, and much much more. We rebuilt the motor because there was a noise in it we didn't like so we removed the heads tore them down had them reworked and installed all new valve train parts. We disassembled the block and found some camshaft and lifter wear. We installed a new 45 degree cam recommended by Mondellos with lifter kit and stock push rods. We did not find any shavings in the oil and the block was very clean.
This is just a snapshot of what has been done to this great 442. It has loads of power and torque which the Olds 400 is known for. There is no sign of wear in the motor and all the fluids are fresh and clean. If you had to build one of these to this quality you would spend well north of $50k. Here is your chance to own a very well optioned and great running 65 442 that will offer you years of driving pleasure.

Here's a little history on the 442 for your reference.
A number of different engines were offered for the car, but not one of them displaced 442cu-in. The name refers to the 4-barrel carburetor, 4-speed transmission and 2 exhaust pipes, which is why the name is often written as "4-4-2" in Oldsmobile literature. It is pronounced "four-four-two", and you would give yourself away as a muscle car novice by saying "four-forty-two". The 442 was a performance package offered for the Cutlass starting in 1964. It was built as a response to competition, but weirdly, this competition was coming from inside GM, rather than an actual outside rival.
In this case, the car which Oldsmobile set their sights on was the Pontiac GTO, a performance version of the mid-level Tempest. The desire to compete with the GTO put the engineers at Oldsmobile in an uncomfortable position. The Cutlass was built on the same platform as the Tempest, so they would be starting on equal footing, but GM had a rule in place at the time that mid-level cars could not be equipped with engines over 330cu-in in displacement. The GTO blatantly broke this rule, but Olds was unwilling to do so, and the first 4-4-2 Package was seemingly mild when compared to the GTO.
This actually seemed worse than it was, although the 330 engine in the 442 was noticeably smaller than the 389 engine in the GTO, Oldsmobile had reworked the 330 Police Apprehender Pursuit to make it more powerful, and in the end it produced 310 horsepower to the GTO's 325, not a huge gap. But this setup, along with the original meaning of the 442 name, would only last one year. GM would give in in 1965, and dropped its 330 cubic inch rule, and with that the 442 got a new 400cu-in V8 for '65. This produced 345 horsepower and 440lb-ft of torque, and Olds now said that 442 stood for 400 cubic inches, 4 barrel carburetor and 2 exhaust pipes.
This is far from complete we know, but we hope the heritage of the now defunct Oldsmobile make can be felt here and give those who are less informed, a bit more insight to the idea of the upscale Muscle Car from Oldsmobile.