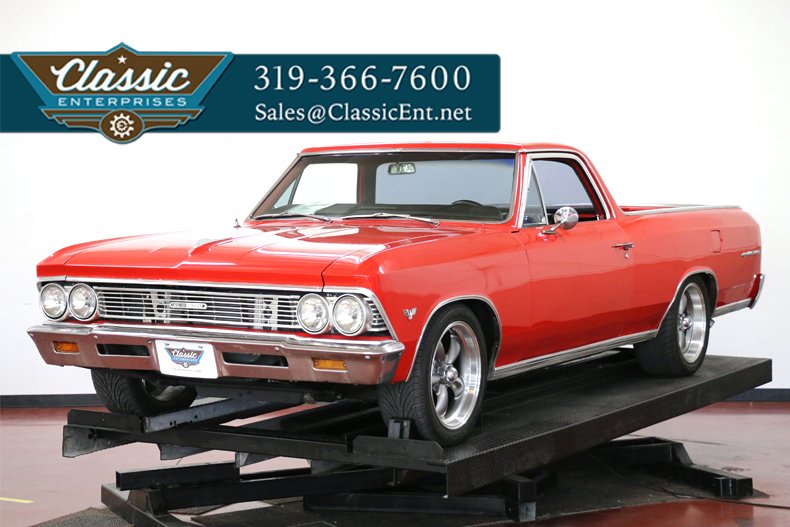 This fabulous El Camino has the look you want and the power to go with it. The Fiesta Red paint is like glass and the body alignment is outstanding. It is as well a done resto-mod as we have seen and has all the right stuff, leather bench seat, ac, disc brakes and more, along with solid floors and frame.
The engine is a pumped up 383 stroker equipped on top with a Holley 750 carb with vacuum secondaries mounted on a Bowtie performance intake. There is a large aluminum radiator for maximum cooling along with a high dollar Tru Tec billet aluminum pulley and serpentine belt system for efficient operation.
The power is channeled through a smooth shifting 700R4 overdrive transmission, with a shift kit, that feeds to a solid 12 bolt rear end with a 3.55 gear. The exhaust is complete starting out with ceramic coated headers and channeled through Flowmaster muffllers and exits out back via full 3 inch pipes, and really calls out when you open up it up. It is sitting on Rev Tech 17 inch alloy wheels wrapped in Z Rated 235/45 up front and 275/40 black wall radial tires. Stopping power comes from power assisted and ventilated 4 wheel discs. The front end is a Flaming River rack and pinion for well behaved handling. In the dash is a complete set of Autometer gauges to keep an eye on the operation of vital engine operations including, tachometer, temperature, oil pressure, and volt gauges. Tunes are supplied by an Alpine stereo with CD and MP3 input. Of course any real Resto Rod needs air conditioning and for that you will find a complete AC and Heating system setup for 134A coolant. A great touch to this fine addition is, the vents for the air are incorporated into the dash, not just hung on the bottom of it. Adding to the comfort level of the interior is a beautiful leather upholstered bench seat with a custom 3 spoke steering wheel. To help with driving convenience there are dual outside rear view mirror with a day night rear view inside. Don't miss out on a chance to own one of the sweetest and most desirable Chevrolet trucks from the 60s set up to enjoy now.


Lets look at a brief summary of the second generation El Camino that Chevrolet introduced 1964. The 1964 model was similar to the Chevelle two-door wagon forward of the B-pillars and carried both "Chevelle" and "El Camino" badges, Chevrolet marketed the vehicle as a utility model and Chevelle's most powerful engines were not available. Initial engine offerings included six-cylinder engines of 194 and 230 cubic inches with horsepower ratings of 120 and 155, respectively. The standard V8 was a 283 cubic-inch Chevy small block with two-barrel carburetor and 195 horsepower with optional engines including a 220-horsepower 283 with four-barrel carburetor and dual exhausts. Added to the El Camino's option list during the course of the 1964 model year were two versions of the 327 cubic-inch small block V8 rated at 250 and 300 horsepower— the latter featuring a higher compression ratio of 10.5:1, larger four-barrel carburetor and dual exhausts. El Caminos also featured Air shocks in the rear, as well as fully boxed frames. The shocks were continued over all generations, the frames only thru 1967. The 1965 El Camino received the same attractive facelift as the '65 Chevelle, with a more pronounced V-shaped front end, and a higher performance L79 version of the 327 engine rated at 350 hp that was also available in Chevelles. Most of the other engines were carried over from 1964, including the 194 and 230 cubic-inch Turbo Thrift sixes, the 195-horsepower 283 cubic-inch Turbo-Fire V8 and 327 cubic-inch Turbo-Fire V8s of 250 and 300 horsepower .Then In 1966, GM added a 396 cu in (6.5 L) V8 engine to the lineup rated from 325 to 375 hp. The 1965 327 would run low 15s in the 1/4 mile (at some 90 mph), while 1966 to 1969 models were easily into the mid- to upper-14s. New sheet metal highlighted the 1966 El Camino, identical to the Chevelle. A new instrument panel with horizontal sweep speedometer was featured. Inside, the standard version featured a bench seat interior and rubber floor mat from the low-line Chevelle 300 series.