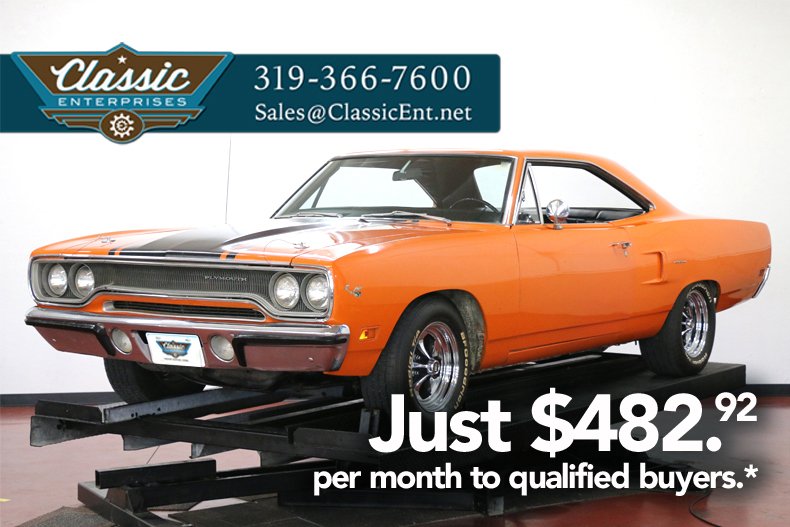 In the” hey day” of the Muscle Car, bigger was always better and you couldn't get much bigger in the Mopar world than a 440 with a 6 Pack and a Pistol Grip 4 speed along with a Dana 60 Track Pack Posi Traction rear end with a 3.54 gear ratio. Of course the insurance man came along and put an end to the party about this time, so this is one of the last of the breed.
Within the collector car world the term original is bantered around quite a bit, and has different meanings to different people, the example we are showing today is a basically an original car with respect to drive line and body panels.
What we have here is a superb running and driving example of that legend. To start with we want to make it clear, this is an original V code numbers matching 440 Six Pack Road Runner with the original drive line and still wearing its original paint. Of course, it still sounds out with the original BEEP BEEP horns and is wearing the original Road Runner decals on the front fenders that do not have the Warner Brothers copyright statement on them. It is an original Go Mango code EK 2 with the Black Air Grabber hood with pins. The original and correct numbers matching engine and transmission still in place. This one was built with the Transverse Stipe Delete code V 88. It comes with the original fender tag but we have not found a broadcast sheet from the Los Angeles plant . We think the reason for that is that the interior has been redone, it is not the correct interior, but it is Mopar pattern and we believe from a little earlier Dodge Coronet.
This is not what one could call a restored car at all. The paint is original and has the typical war wounds from 46 years of life. There are some minor scratches, dings, and small dents. The glass is original along with the windshield and is in good but not perfect shape. The original mufflers and exhaust have been replaced with Flowmasters and pipes that exit the rear of the car for a distinctive big block muscle car sound. The radiator is the correct and probably original 26 inch version. The original shocks have been replaced with KYB Gasmatics for a smooth ride and sure handling. Since this one was built for the California market in 1970 it came with the N 95 Emissions Control system and included the Nosie Reduction Package code N 97. As far as driving goes, this is a great handling and running 6 Pack Road Runner. The front suspension includes the correct K member with skid plate and larger diameter torsion bar. The power steering, power brakes with front discs (which were Kelsey Hayes originally), and raised white letter radial tires make it fun and easy to drive while still having the power to send that shot of adrenaline into your system, making you feel 18 years old again.
The previous owner has an extensive collection of cars and motorcycles and likes stuff more original than restored, he found this one in Las Vegas about 15 years ago and has kept it just the way he found it. There were only a total of 651 440 6 Pack Road Runners built so the 4 speed with Air Grabber is very rare. Add to that a great High Impact color… and, well, just how many can be out there today? If you're a real player on a serious multi carb car this is an opportunity to enjoy one at a great value today. We have spoken to many Mopar fans over the years and many of them will tell you that a properly dialed in 440 Six Pack car, in the right hands, will out perform a Hemi on any given day. We will leave it up to you to prove though. This one is a great car as it is, or will make a fabulous subject for a full restoration that would enhance the value and market appreciation, in some circles. So if you like your collector car more original you can own this one and enjoy it as it is or lavish your attention on it and make it nicer than new. That's your choice. So don't be shy, grab one of the rarest and highly desirable Mopar legends ever created.