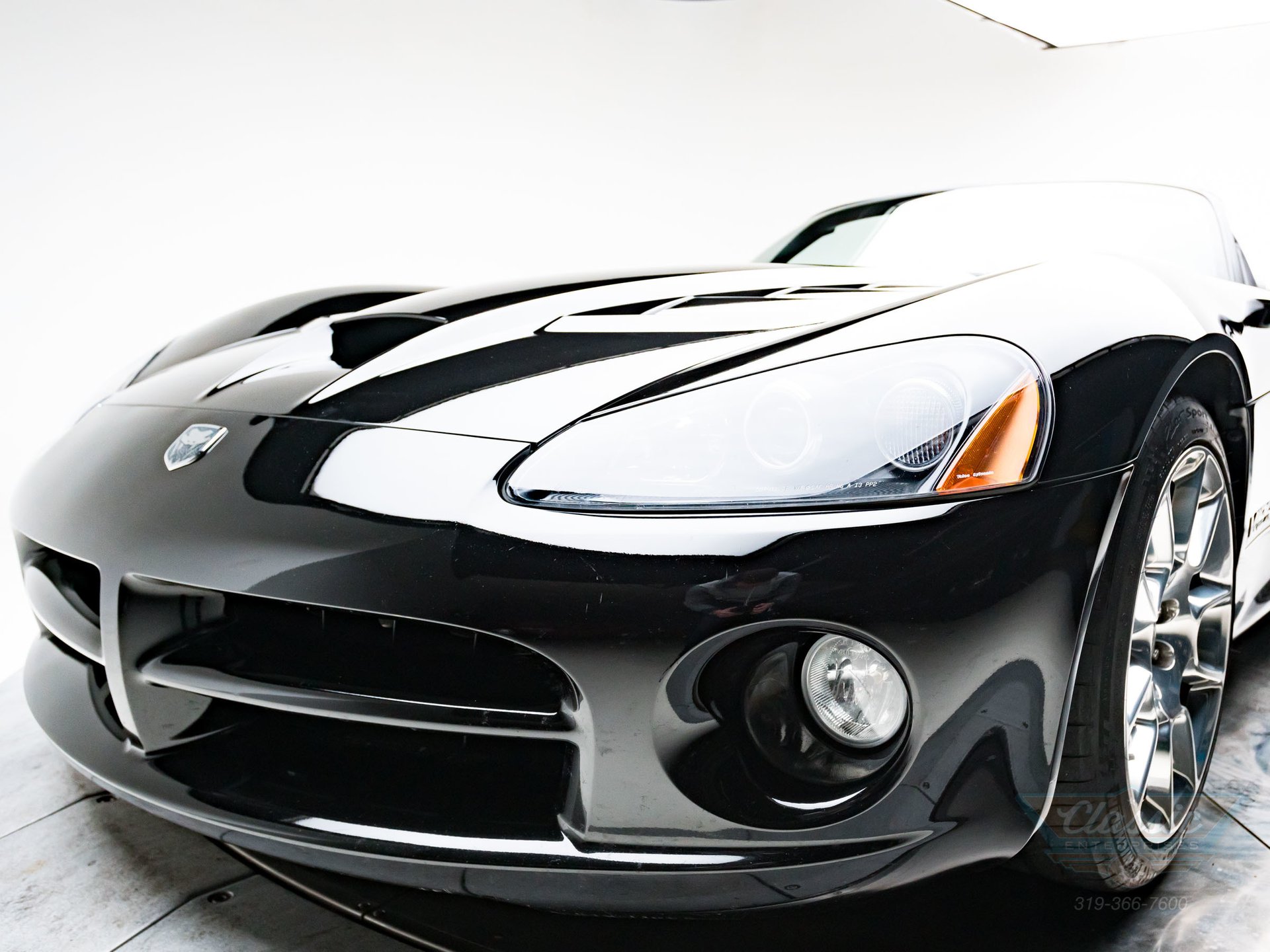 To get attention nowadays, you need a really big number in the horsepower column, say like 600, which just so happens to be the figure produced by this iteration of the Dodge Viper SRT10. But this Viper is more than a big horsepower number. While the Dodge engineers were extracting more grunt, they tweaked many other aspects of the car, and the result is one spectacular automobile.
Let's start with that engine. By increasing the cylinder bore by one millimeter, the engine capacity went from 8.3 to 8.4 liters. The new block has cross-bolted main-bearing caps for better durability, and there are new cylinder heads, too. An ingenious cam within a camshaft uses hydraulic pressure to vary the exhaust valve timing by up to 40 degrees. All the valves are larger, and those on the intake side are now hollow. There is a new two-piece intake manifold and a tubular-header exhaust system that flows 20 percent better. And they've abandoned the old exhaust crossover pipes under the car, which created a huge amount of cabin heat. With the increase in torque, Dodge went to a twin-plate clutch, an industry first, which it claims reduces rotating inertia by 18 percent. The six-speed Tremec manual transmission has been beefed up, with wider gears, triple-cone synchronizers on first and second, and a shifter with 30-percent-shorter throws. A speed-sensing GKN ViscoLok hydraulic clutch-pack-style differential is new.
The suspension retains its control-arm architecture all around, but there are myriad changes. The spring rates have been increased by five percent, the alloy-bodied Multimatic shocks have increased front and rear compression and decreased rear low-speed rebound, and the rear anti-roll bar is now solid rather than hollow. There is far more negative camber all around—and more front castor.
Externally, there are new wheel designs and a much more aggressive hood that takes its inspiration from the Competition coupe: The extra slots have the benefit of extracting engine heat as well as increasing downforce.
According to Dodge, this Viper topped out at 202 mph. The convertible managed 197 in Dodge's testing with the top down, which is pretty impressive. According to independent tests, the Viper Coupe is monstrously fast from a standing start, blasting to 60 mph in 3.5 seconds and to 100 mph in 7.6 seconds. The quarter-mile rips past in heart pounding 11.6 seconds at 126 mph.
But even better than the improved performance was the improved behavior. The Viper has always been pretty easy to drive quickly, but it always felt, well, a bit tame. Fast, sure, but you always expected a car that had more than 500 horsepower under your right hoof to feel more dramatic and quicker in its responses. The engine sounded a bit flaccid and was almost too linear in its power delivery, and the shifter was agricultural.
The first surprise in the new car was that the shifter is pretty sweet and much more positive in feel. On the street, you notice the Viper is still geared for supersonic speeds in sixth gear, but slam it down a couple of gears, and you realize that it's really, really quick. The engine has a definite step in its power delivery at about three grand on the tach, yet it puts the 600 horsepower down amazingly well for a car that doesn't have traction control (or stability control, for that matter).
Find a more challenging road or, even better, head off to a track and the Viper comes alive. The car turns in much more readily than the old one did, and it's easier to rotate by breezing off the gas on corner entry, which helps to dial out its tendency to understeer. On the exit of the tighter bends, the car can be steered sideways on the throttle, but it remains super-stable on the high-speed sweepers. The Viper remains, essentially, a toy rather than an everyday driver—but it's a mighty fine, explosively fast toy, especially on the track.
With the technical side answered lets talk about this individual unit. It is finished in original Viper Black with an immaculate Black and Camel interior, polished alloy wheels with excellent tires, an aftermarket stereo to keep the tunes flowing at speed, and only 22k original miles on the odometer ( and it looks like 22). There is a clean Carfax showing 3 owners and no issues. This is one of those cars that is not for the faint of heart but if you have the "need for speed" get in and hang on!